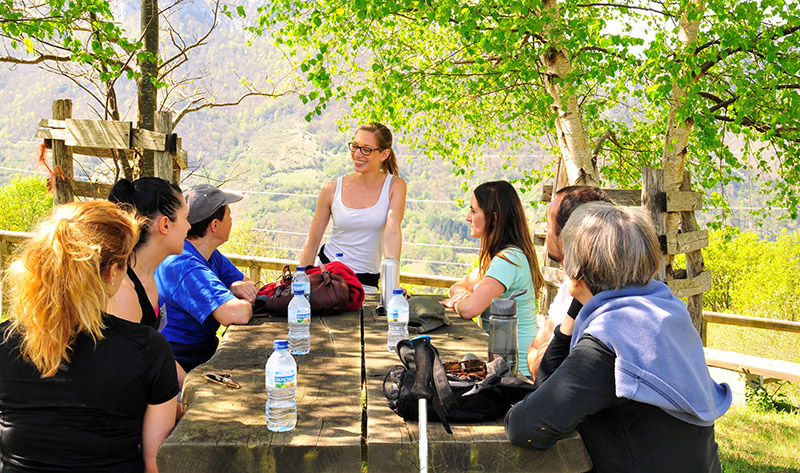 Holly: What motivated you to create immersion programs, rather than focusing only on traditional classroom learning?

Paula: 10 years ago we discovered this methodology and we felt in love with it for several reasons.  One of them was that it allows the students to put their English to the test in every aspect of life and to learn from the authentic real-world necessity of having to communicate with people from all over the world. It is that daily challenge that causes them improve tremendously and helps them finally begin thinking in English. They can accomplish in just one week of English Immersion what they´ve been unsuccessfully trying to achieve for years through traditional classroom learning.

Holly: What do you think is the greatest benefit, and biggest challenge for your participants?

Zach: It is impressive how much the programs help Spaniards to break out of their shells and overcome what they call “the sense of ridiculousness” which is one of the main problems that we notice within Spanish students. By stopping the mental translations and beginning to think in the language, they quickly become more comfortable speaking in English.  One great hurdle that the students often have to overcome is that in Spain people are not regularly exposed to natively spoken English… television programs are dubbed, radio interviews are translated, public school teachers are mostly non-native, and this is a big disadvantage compared to other countries like Portugal or the Netherlands for instance, that do not give as many language facilities to their citizens.

Holly: What do you think is the greatest reward, and biggest challenge for yourselves doing this work?

Paula: For us the greatest thing is to see what happens when you bring a group of people of different nationalities together and you create the perfect conditions for them to relax and take their time communicating.  This un-rushed time, purely for communication, is something that we don´t have in our daily lives. The sense of community that starts grow as a result of this extraordinary time together is always very rewarding. On the other hand, possibly the biggest challenge is to motivate people to speak without the fear of making mistakes.

Holly: How have your lives in theater and science shaped or impacted the way you approach language learning?

Paula: Nature is a source of energy. The fact that our English Getaway experiences take place in rural hotels and that we go on nature walks during the week help the participants to release tension and improve their concentration.  This helps the communication and raises their English to a different level. On the other hand, we use theater sketches to help the Spaniards overcome their fears. Once they see themselves doing something they never thought they could do normally, speaking in English becomes a piece of cake! And it also brings loads of fun and laughter to the end of each day in a very positive way.

Holly: I often get people saying that they feel like they have plateaued in their learning when they get to a high intermediate level. Why do you think this happens, and what can we do to keep improving?

Zach: I think once a student gets to an intermediate level, practice with native people becomes essential. I often compare learning English with learning to drive a car. One thing is to know the theory and a very different thing is to know how to drive, you need at least one year of practice through all types of roads to feel confident. With English is the same. It is also very motivational when they see the utility of the language itself.  If the student has never had the opportunity to confront a real-world situation more difficult than ordering in a restaurant or asking for a bus ticket, they can easily reach an “acceptable” level of comfort with the language and become stagnant. However, when a student is in a situation where they have to transmit their ideas and opinions to a group and share a part of themselves and who they are, the experience becomes much more rewarding and gratifying and they find a greater motivation to continue improving.

Holly: Do you believe that speaking and living in 2 languages has altered your personalities or way of thinking?

Paula: I think that being fluent in a second language, and especially English, opens doors to the world and allows you to get to know people from other cultures.  It opens your mind a lot, so it is definitely a very positive thing. At home, our communication is completely bilingual and it is funny but sometimes we don’t even notice that we’ve changed languages, sometimes some things just sound better in English or the other way around. I guess for our 5-year-old son it can be pretty confusing at times, but he seems to take it well!

Holy: Is there anything that has really surprised you since you began this work?

Paula: Sometimes the personality transformations that you see during a week. Some people that come to our 6-day Immersion Programs have high-responsibility jobs and they feel comfortable playing their role but when you take their mother tongue away from them, they feel vulnerable, and they are not used to feeling that way. They need to learn to be themselves again, outside of their daily roles, and they rediscover many things that they had forgotten.  It is wonderful.

Holly: Do you think language and culture are the linked? Do you feel that culture can be taught like language?

Zach: I think that language teaches culture.  Through language we gain a deeper understanding of the inherent culture of that country and the way the people interact and express themselves.  In fact, it has a much different feel to it when you speak in English or in Spanish because the expressions and typical gestures, formality or informality of the language and the general way of communicating varies greatly.  Sometimes you can feel like you have a double personality because the way you express yourself in a foreign language may be very distinct from the way you’d do so in your own native language. But only by making these changes, do you really become integrated in the culture.

Holly: As an accent coach, something people often ask me is “Does pronunciation really matter? If your grammar is good, who cares if you have an accent?” What do you think?

Paula: I don’t think having an accent is a problem, unless you do acting for living, of course! Most of us will never completely loose our accents, which is fine. However it is important to try to minimize your accent and be able to pronounce as clearly as possible in order to make yourself understood.  The incorrect pronunciation of a vowel sound, for example, can completely change the meaning of some words.

Holly: What do you think we could do to improve the culture of language learning in Spain?

Zach: Look for ways of having fun while learning! It can’t be an obligation, we have to take it as an opportunity to improve our lives and our social abilities.  If people begin to see language learning as an opportunity for personal improvement, the motivation grows rapidly and people improve more quickly, which makes a big difference.  Nowadays there are thousands of applications, language meet-ups and intensive programs like ours, where one can learn and have fun at the same time and that is the key to every language process.